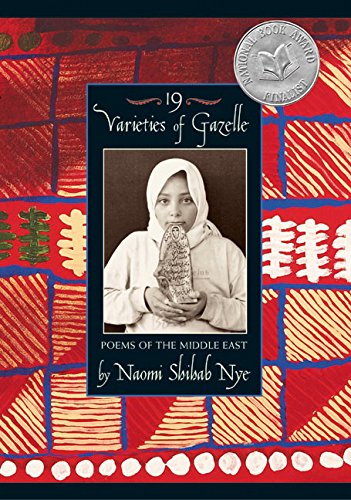 19 Varieties of Gazelle: Poems of the Middle East

“Tell me how to live so many lives at once …”

Fowzi, who beats everyone at dominoes; Ibtisam, who wanted to be a doctor; Abu Mahmoud, who knows every eggplant and peach in his West Bank garden; mysterious Uncle Mohammed, who moved to the mountain; a girl in a red sweater dangling a book bag; children in velvet dresses who haunt the candy bowl at the party; Baba Kamalyari, age 71; Mr. Dajani and his swans; Sitti Khadra, who never lost her peace inside.

Maybe they have something to tell us.

Naomi Shihab Nye has been writing about being Arab-American, about Jerusalem, about the West Bank, about family all her life. These new and collected poems of the Middle East — sixty in all — appear together here for the first time.

As she grieved over the “huge shadow [that] had been cast across the lives of so many innocent people and an ancient culture’s pride” after September 11, 2001, poet and author Naomi Shihab Nye’s natural response was to write, to grasp “onto details to stay afloat.” Accordingly, Nye has gathered over four dozen of her own poems about the Middle East and about being an Arab American living in the United States. Devoted followers of the award-winning and beloved poet will recognize some of their favorites from her earlier collections (The Space Between Our Footsteps: Poems and Paintings from the Middle East, etc.), while absorbing themselves in her new haunting and evocative poems. Nye writes of figs and olives, fathers’ blessings and grandmothers’ hands that “recognize grapes, / and the damp shine of a goat’s new skin.” She writes of Palestinians, living and dead, of war, and of peace. Readers of all ages will be profoundly moved by the vitality and hope in these beautiful lines from Nye’s heart. (Ages 9 to adult) –Emilie Coulter

Where In The World Books is a participant in the Amazon Services LLC Associates Program, an affiliate advertising program designed to provide a means for sites to earn advertising fees by advertising and linking to (amazon.com).

2018 Where In The World Books © Copyright. All rights reserved | DC Web Design